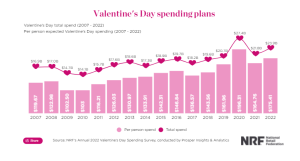 Some believe Valentine’s Day originated as a way to offset the Pagan holiday of Lupercalia, which History described as “a bloody, violent and sexually charged celebration awash with animal sacrifice, random matchmaking and coupling in the hopes of warding off evil spirits and infertility.” Pope Gelasius declared February 14 St. Valentine’s Day during the 5th century. The Catholic Church recognizes three different saints named Valentine or Valentinus, all who suffered horrific deaths in the name of religion. During the Middle Ages, people began to believe that bird mating season began on February 14. English poet Geoffrey Chaucer was the first to record St. Valentine’s Day as a day of romance in 1375 when he penned the poem “Parliament of Foules,” writing, “For this was sent on Seynt Valentyne’s [sic] day / Whan every foul cometh there [sic] to choose his mate.” Hence the phrase “love birds.”

In modern days, Valentine’s Day is an opportunity for businesses to use the rhetoric of pathos to convince people to spend money to express love. The National Retail Federation (NRF) expects Americans to spend $23.9 billion on the holiday this year, an increase from last year’s $21.8 billion spent. Valentine’s Day shopping peaked in 2020, one blissful month before the depths of the pandemic began, with a record $27.8 billion spent. Around 53% of Americans state that they plan to celebrate the holiday, with 76% stating it’s important to spend this year due to the state of the pandemic. Romantic.

The average US consumer is expected to spend $175.41 per person, up from $164.76 in 2021. Candy (56%), greeting cards (40%), and flowers (37%) are the most popular gifts. Around 31% state they plan to go out this year, up from 24% in 2021, which should add $4.3 billion to the recovering hospitality sector. Around 22% said that they plan to purchase jewelry and the NRF predicts $6.2 billion will be spent, marking the highest amount spent on jewelry in the survey’s history. These figures only represent what will be spent in the US, but Valentine’s Day is celebrated by consumers across the world.

How The Fed Killed Mortgage Current Coupon Rate – MBS Index, Back To 1985 Levels (As It Tries To Fight Inflation, A Fight It Can’t Win)

By the Numbers: Zelle payments surpass checks written at Bank of America