Accelerating to 7.9% this February, inflation is rising at its fastest pace since 1982. So if you haven’t found a way to increase your income by at least that much this year, then you’re paying the “tax that no one voted for.” Compared to last year, rising prices have eaten nearly one entire month’s paycheck – that’s how much more the average American’s expenses have gone up.


That’s sobering. And it’s enough to make a lot of people rethink their financial decisions.

By itself, historic inflation like this is bad enough for retirement savers. But throw in some behavioral concerns, we’re looking at what could easily become a self-fulfilling prophecy. We’re going to briefly examine that idea in this article.

What the present tells us about the future

Let’s start with the latest economic worries that consumers have, as reported in two recent articles. The first put a spotlight on “inflation fears”:

To be sure, the past year has been difficult for many. Fully 52% said they are under more financial stress than a year ago. They are most concerned about gas prices, housing costs and food costs. In the last year, gas spiked 38%, shelter rose 4.7% and food prices increased 7.9%.

Meanwhile, a bulk of Americans are unhappy with the response from the White House, with 61% disapproving of the way President Joe Biden is handling inflation.

When more than half of American families are feeling financial stress, it doesn’t matter who they blame. What matters is what they do about it.

We know that financial stress causes folks to make hard choices. To change their spending habits. And if they’re expecting the bad times to continue, well, that just piles on even more financial stress.

That’s why this is important:

The current environment has a majority of Americans concerned about an economic recession, with 81% of respondents believing one is likely to happen this year.

Anticipating a recession definitely changes our spending and saving patterns. Typically, people postpone big purchases. Delay a planned vacation. Save more and spend less. And while those are likely wise choices on the individual level, when they’re spread across the nation, well, that results in downward pressure on economic activity.

Inflation is poised to continue to run hot, squeezing budgets even further. The impact will be the harshest on those with the lowest incomes who may be pushed into survival mode, said Brown. For those struggling to cut spending even more, she also said to reach out to creditors and lenders to see if you can put off payments.

Putting off payments on debt and people being pushed into survival mode aren’t good in any economy. And when it comes to squeezing the budget, there are some very clear trends: 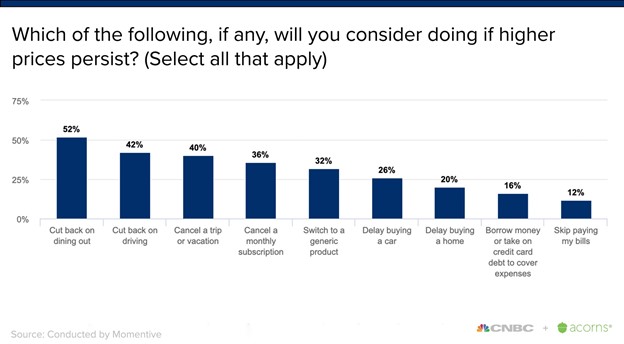 Spending less on cars, homes, or vacations may be absolutely the right choice for a family. On the other hand, that would force dealerships, realtors, construction workers, restaurant staff and hotels to tighten their belts, too.

When employers cut expenses, they often turn to layoffs and downsizing.

If your spending habits change when you’re just anticipating a recession, how much more do you cut back if you’re worried about losing your job? That’s a pretty big deal for most people! Say all you want about the “gig economy” or entrepreneurship, the reality is non-primary employment accounts for only 4% of the average American household’s income.

Facing the worry of losing 96% of your income, wouldn’t you make some changes?

The effects of millions of American families making decisions to cut back is pretty clear from measures of “consumer sentiment” (we’ll discuss that in a moment).

Now remember, the American economy runs on consumer spending and credit lending. If people cut back spending, the reasons why don’t matter. Maybe they’re buying hamburger instead of steak (or lentils instead of hamburger) at the grocery store because of skyrocketing food prices. Maybe they’re putting off big purchases in anticipation of a looming recession. Or maybe they’re just hoarding their cash because their employment doesn’t feel secure.

Which is exactly what could be happening right now…

We already know that Powell’s Fed intends to raise rates at least six more times this year to curb inflation. How aggressive he will do that remains to be seen, but it doesn’t appear to be easing consumer concerns with rising prices.

You can see how often most savers at all income levels think about rising prices in a bar graph taken from a recent poll by Momentive:

At every income level, at least 70% of poll respondents are thinking about inflation in some form or another. Well, they have good reasons! Global food prices are at an all-time high, and we’ve seen some absolutely shocking gas prices in the last few weeks. That’s enough to rattle everyone.

And it shows. Americans just aren’t that confident in the economy anymore, as University of Michigan consumer sentiment for the U.S. is in the gutter. People are more pessimistic today than during the darkest times of the Covid crash – a ten-year low, almost as bad as the middle of the last recession:

No matter how we look at it, everyday Americans are feeling an enormous amount of pressure.

And guess who’s just stepped in to make it worse? That’s right, our best friends at the Federal Reserve…

Fed’s “too little, too late” is still too much

After spending a year dismissing inflation as “transitory,” caused by “supply chain blips” that was really only a “high class problem,” the Fed have finally begun to respond.

But it’s too late. Not only because inflation is now quadruple the Fed’s alleged target rate of 2%, but because the economy is slowing down.

The only other time in 45 years the Fed raised interest rates while consumer sentiment was falling as it is today was in 1979, when Paul Volker was in charge. And the result was back-to-back recessions. And consider, back then, the economy wasn’t leveraged. The debt-to-gdp ratio was only 30%. (It’s now 120%.)

Every other time over the past 45 years when consumer sentiment was falling, the Fed was cutting rates.

In other words, “Powell’s so-called “buoyant” economy is already leveraged out, according to Dyson.

Theoretically, we should be taking advantage of low interest rates right now. But we aren’t, because sentiment is low thanks in part to ridiculously high inflation that we’re thinking about all the time.

Things don’t appear to be going so well. That, and Powell is committed to raising rates like Volcker did in 1979, which led to back-to-back recessions and a “lost decade” for stocks.

Regardless of your personal economic sentiment, whether you’re squeezing your budget or thinking about inflation all the time, it’s a good idea to make sure you and your family’s finances can endure another “lost decade”…


Are your savings resilient?

No matter what budgetary decisions you end up making, one thing is certain. Your retirement savings can’t fall victim if some self-fulfilling prophecy comes to pass.

Even Volcker’s controversial “solution” didn’t prevent back-to-back recessions. So Powell’s hawkish approach could have the same outcome. That means you should consider building in as much resiliency into your retirement savings plan as possible.

You’ve heard the tired advice “Don’t put all your eggs in one basket.” But you certainly can’t just “set it and forget it” when it comes to your retirement portfolio. Proper ongoing diversification is important.

Making your retirement more resilient can also include taking a few minutes to consider learning how gold performs over time and the benefits of inflation-resistant investments before it’s too late.

IT HAS BEGUN. THEY ARE HUNTING THE RICH. FOOD RIOTS ACROSS OUR WORLD HAVE STARTED

Doomberg: Global Food & Energy Crisis Will Continue To Get Worse Because of Bad Policies