U.S. Debt Soars To The Moon… How Long Till It Comes Crashing Down? – Investment Watch

In what is perhaps the most disturbing economic development of the 21st century (so far at least), the official U.S. debt soared to just over $30 trillion as of February 1st, 2022. (At this moment, the number sits at $30 trillion, 3 billion, 214 million.)

Wolf Richter described the debt as, “trillions whooshing by so fast they’re hard to even see.”


He’s right. According to federal government data, the national debt spiked an incredible 27% (that’s $6.5 trillion) since March of 2020, the beginning of the pandemic panic. That feels like yesterday.

But perhaps more amazing is the fact that over the last decade the national debt has almost doubled. You can see the debt soaring “to the moon” in this chart. 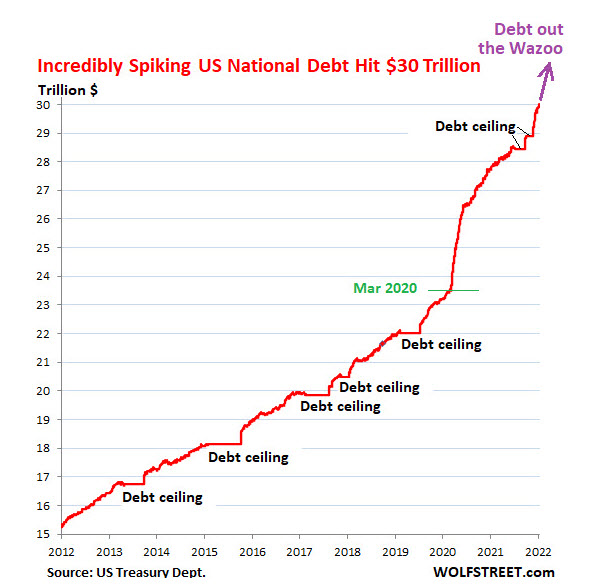 Step back another decade, to the year 2000, and the U.S. owed $5.6 trillion. In other words, in the first 225 years of American history, the nation accumulated $5.6 trillion in debt. In the next 20 years, the federal government wrote another $25 trillion in IOUs. From this perspective, the government’s binge of wreckless, profligate spending makes a three-day booze-fueled Las Vegas billionaire’s bachelor party look positively responsible.

Here’s the thing, though… When billionaire bachelor bros blow billions at the Bellagio, they’re spending their own money. They’re only hurting themselves. It’s easy to shake your head, maybe even smile and think, boys will be boys. Maybe they’ll learn a valuable lesson about the real value of money.

Now, imagine that same squad of casino spendthrifts shooting craps and tipping waitstaff $1,000 a round are using your credit card.

That changes things, doesn’t it?

Back to our analogy: the billionaire bachelor party has stolen your credit card and they’re wearing the numbers off it. Well, they can’t spend too much, can they? Credit cards, after all, have a limit.

Unfortunately, the U.S. government’s “credit card” doesn’t have a limit…

Now, there are supposed to be legislative controls on government spending. The Treasury Department issues a variety of IOUs, promising to pay back borrowed money anywhere from a few days later to 30 years later. (For convenience, we’ll call them all Treasury bonds.) Every single one is backed by “the full faith and credit of the U.S. government.”

Now, the Treasury Department’s job is to sell as many Treasury bonds as they have to in order to cover the spending bills Congress has passed and the President has authorized. Fortunately, some legislators realized, way back in 1939, that authorizes to government to effectively spend whatever they wanted. So in ’39, Congress instituted a limit on total accumulated debt. Today, we call that the “debt ceiling.”

The debt ceiling is meant to be the absolute limit of unfinanced spending, just like a credit card limit. The intention? To make legislators stop and think about what they’re doing. The debt limit is a deliberate brake on the temptation to infinite spending.

When U.S. debt hits the debt ceiling, borrowing is supposed to stop. At least temporarily. Because it takes an act of Congress to change the debt ceiling, it creates a cooling-off period. Time to reflect and consider, Do we really need to spend even more money?

That’s how the system was designed.

For the last few decades, the borrowing and spending just hasn’t stopped. That’s because Congress decides to raise the debt ceiling, or just suspend it temporarily. (The government is currently running on fumes, writing checks over the established debt ceiling thanks to December’s “continuing resolution” that expires on February 18.)

Based on this administration’s record, outcome #1 is the most likely course. Which means our leaders will continue to finance today’s spending by promising to pay the loans back using our grandchildren’s and great-grandchildren’s tax payments.

So far, this “buy now, pay later” national financing scheme has worked! To the tune of $30 trillion dollars (and counting). Which means that the world has believed in the U.S. government’s intention, and ability, to pay back $30 trillion.

The only question is, how much longer can that belief last?

Dear Congress, Mr. Ponzi called, he wants his scheme back

There’s no way to know exactly how long it might be before one of our country’s major lenders, China for example, simply stops buying U.S. Treasury bonds. “No, thank you, we already have plenty.” For decades, China has bought up Treasury bonds to keep its currency undervalued compared to the dollar – that keeps Chinese imported products cheap here in the U.S. It also means China has enough U.S. IOUs that President Xi Jinping could wreak economic havoc in the U.S. by simply selling China’s hoard of Treasury bonds on the open market. Escalating tensions between China and Taiwan have already reached the most fevered pitch in decades. The U.S. has sold Taiwan hundreds of billions in weapons already, and has vowed to aid the island nation resist China’s aggression.

But President Xi has the power to wreck America’s economy, quite possibly taking the U.S. completely out of the Taiwan conflict, without firing a single shot. Maybe that’s what Chinese Foreign Minister Wang Yi meant when he warned that aiding Taiwan would “bring an unbearable cost to the U.S. itself.”

Even when our nation isn’t engaged in geopolitical chess in Ukraine or the South China Sea, there’s another natural limit on how long the house of cards can last.

Mike Shedlock explained how the Fed could be backing the U.S. into a corner with its plans to combat rising inflation:

The Fed delayed hikes far too long, brewing massive bubbles along the way. It will soon be stuck in a glue of its own making, with no policies that make any sense.

In another piece, Shedlock gave his take on the financial bubble, and Federal Reserve Chairman Powell’s seemingly out of touch remarks on the same:

This is undoubtedly the biggest financial bubble in history. Consumers appear to be in good shape only because of the asset bubbles. The consumers without assets, the bottom 40% or so of the nation, have no assets. They have seen big wage hikes, but inflation has eaten every penny of it and then some.

André Marques states rather clearly that the Fed has a big problem. They’re nearly out of room to taper asset purchases or raise rates, which means the Fed won’t be able to stop the next stock market crash:

The Fed is trapped in its own web. It does not have much room to raise rates without major complications in the financial market and in the economy. Even if it finally delivers on tapering and starts raising rates, it won’t get any further than it did back in the last rate hike (2015–18) and balance sheet shrinking (2017–19) cycles.

We’ve covered a lot of ground in this article. Let’s sum it up:

One thing we do know: The world is watching, and right now, the U.S. is in a precarious financial situation.

The Biden administration’s Plan B seems to be the same as their Plan A: “Spend more! Spend faster! We’ll spend our way to prosperity!”

What’s your Plan B?

Diversification beyond the U.S. dollar

A good general piece of advice we brought up recently: Having your savings over-concentrated could sabotage your retirement. Especially now.

If another country calls in the loan and wants the U.S. to pay up, panic could ensue…

Should the Federal Reserve fail to stop today’s inflation spiral, dollars will continue to plunge into worthlessness…

If Congress continues to rack up debt at the same rate as the last twenty years, pretty soon no one in the world will want dollars…

At times like these, it’s smart to prepare your financial future for the worst-case scenario, even while hoping for the best. Consider ways to diversify your savings into assets whose value doesn’t depend on “the full faith and credit of the U.S. government.”

For centuries, one of those intrinsically-valuable assets has been physical gold. There’s a reason the U.S. maintains a huge stockpile of gold bars in Fort Knox. It’s the same reason virtually every other nation on the planet maintains a stockpile of physical precious metals. Gold and silver’s value don’t require faith. They don’t depend on credit.

Take a moment to learn how gold performs over time and consider whether diversifying your savings with physical precious metals would help you sleep soundly through the next trade war, the next debt ceiling debate and the next stock market crash.