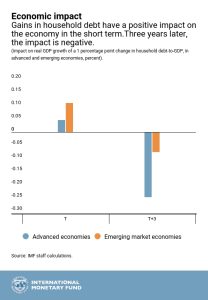 Household debt in the US spiked to the highest level since 2007. According to the Federal Reserve Bank of New York, Americans accumulated an additional $1 trillion in debt, with the figure growing by $333 billion in Q4 alone.

Mortgage and auto loans are the main sources of debt for Americans. Home loan originations hit a record high last year thanks to low rates, and mortgage debt increased by $258 billion in Q4 to $10.94 trillion.

Balances on auto loans rose by $15 billion in Q4, and $84 billion over the course of the year. Around $734 billion is attributed to new auto loans in 2021 to a total of $1.46 in auto loan debt. The Fed noted this was the largest volume on record. The chip shortage and supply chain crisis have caused auto prices to spike by 20% on average. The current median monthly payment on a car loan is $418 per month.

Credit card debt also rose as well, increasing by $52 billion in Q4, marking the largest increase on record. On a positive note, card balances are $71 billion lower than they were at the end of 2019.

The International Monetary Fund has warned that high household debt hinders long-term GDP growth. “Our study found that a 5 percentage-point increase in the ratio of household debt to GDP over a three-year period forecasts a 1.25 percentage-point decline in inflation-adjusted growth three years in the future. Higher debt is associated with significantly higher unemployment up to four years ahead. And a 1 percentage point increase in debt raises the odds of a future banking crisis by about 1 percentage point. That’s a significant increase, when you consider that the probability of a crisis is 3.5 percent, even without any increase in debt,” the IMF stated in a report released in 2017. In the short-term, increased debt will provide a small boost to the nation. If inflation persists and people are required to take on more debt for essentials like transportation and shelter, the nation’s GDP will be at risk.