“Vaccine Macht Frei”. Those Who Do Not Learn From History Are Doomed To Repeat It – Investment Watch

“Vaccine Macht Frei”.
“Those who do not learn from history are doomed to repeat it.”

The Totalitarian Fascists are ‘outraged’ that their Totalitarian Fascist policies, which are now being imposed across Austria, Germany, Italy, France, Greece, Australia, Canada, and parts of the US; are being compared to the policies which the Nazis used to demonize the Jews in 1930’s Germany before loading them onto cattle trucks to be transported to the Ghettoes and the Forced Labor Camps.


They are the SAME policies and propaganda.

The Nazis forced everyone to carry a “Health Pass” which purportedly showed you were fit to work, but in reality was a racial and social identifier to exclude Jews and other “undesirables” from employment, education, and society in general.

There is NO difference between the Nazi’s “Health Pass” and the Covid “Vaxx Pass”.
The Nazi’s “Health Pass” didn’t mean you didn’t have an infectious disease like TB, it meant you were acceptable to the government, subservient to the government, and complied with government orders, no matter how insane those orders might be.
Similarly the “Covid Pass” does NOT mean you don’t have Covid.
Recent data from numerous countries – England, Scotland, Denmark, Germany, Israel, Canada (Ontario), show that the ‘fully vaxxed’ are MORE LIKELY to catch and spread the disease, and the more jabs you have the more likely you are to catch it. The double jabbed are twice as likely as the non-jabbed to catch and transmit Covid. The triple jabbed are twice as likely to become infected and transmit Covid compared to the double jabbed.
The Covid Vaxx DAMAGES your immune system, causes all sorts of disease (blood clots, heart damage, strokes, brain damage, nerve damage, cancer etc.) and makes you LESS HEALTHY.

The purpose of both the Nazi’s “Health Pass” and the “Covid Pass” is to enforce compliance with government policy. If you do not comply your “Pass” will be rescinded and you will be excluded from work, education, travel and society in general.
The purpose is CONTROL, NOT Public Health.

The Nazi’s called the people they determined to be undesirables “a danger to society” and “unclean”. The Nazi’s accused the Jews and Gypsies etc. of carrying TB and other infectious diseases.
The current Totalitarian Fascists accuse the non-jabbed of spreading Covid when it is actually the ‘fully jabbed’ that are much more likely to spread Covid, be more susceptible to other infectious and non-infectious diseases, be less healthy in general, and clog up the hospitals with vaccine injuries and other health problems caused by the vaxx.
The current Totalitarian Fascists are falsely accusing the non-jabbed and non-poisoned of being “a danger to society” or “domestic terrorists”, when these are the ONLY people who can save society from the Orwellian Dystopian Nightmare we are currently heading towards.

Both the Nazi’s and the current Totalitarian Fascists use Fear and Mass Psychosis to control their domestic populations.
As Hermann Goering said at the Nuremberg Trials 75 years ago “All you need to control people is fear. If you can make people afraid of something you can get them to do anything”. 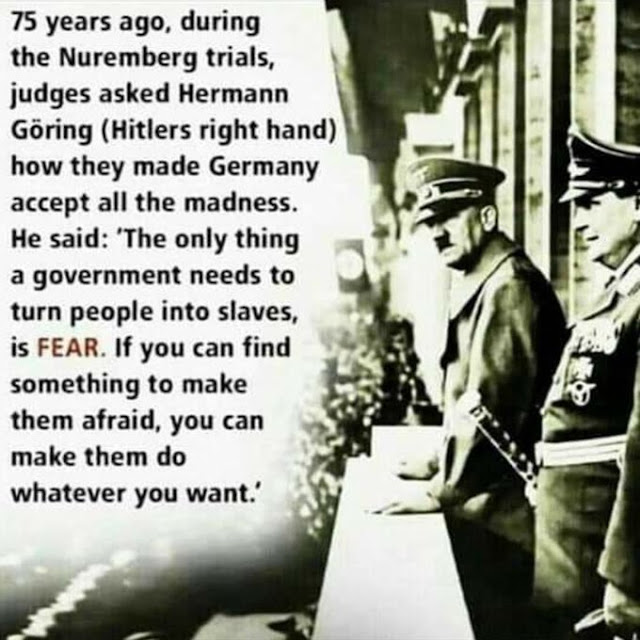 So the current Totalitarian Fascists created Fear and Mass Psychosis by:
Showing pictures on TV of people in China supposedly dropping dead in the street from Covid. Q: When has anyone in Europe or the US seen anyone drop dead in the street from Covid? A: Never.
Showing pictures on TV and in the Press of a packed hospital in Lombardy, Italy from March 2020 and then saying it was from some other hospital, at some other time, in some other country.
Inflating the Covid death counts by more than 10 times using a fraudulent definition of a Covid death as “Death from any cause within 28 days of a positive test”.
Using a fraudulent PCR (and LFT) test which gives 97% false positives in low prevalence periods and should NEVER be used for diagnosis.
Saying it affects everyone – when Covid only significantly affects the elderly aged 70 plus with comorbidities and the morbidly obese.
Announcing a daily count on TV and in the Press of purported official “cases” (positive tests) and official “Covid deaths” over 90% of whom did NOT die of Covid,
Claiming there are no effective treatments for Covid when effective treatments were used in China, South Korea, and Japan from February 2020 including Hydroxychloroquine (or chloroquine) and Zinc, and large doses of Vitamins D and C. Ivermectin was being used as a highly effective treatment or prevention in some countries from around May 2020.
Claiming there are no effective preventions when sufficient Vitamin D reduces your risk of dying from Covid by 90%. Pretty much no one has died from Covid with D levels above 50 ng/ml. Ivermectin is also an effective preventative for high risk groups. Vitamin C and Zinc are also important preventatives.
Invented “Long Covid” – which all recent research says is a myth with symptoms over 90% of the time in people’s heads. (You can get long term symptoms from other flu viruses but such cases are very rare.)
Saying children are at risk and transmit the disease, when there are probably less than 10 examples worldwide of previous healthy children dying from (not with) Covid and zero recorded cases of a child transmitting Covid to a teacher in school.

All of the above disinfo made most people believe that:
Covid was over 100 times more dangerous than it actually is. Covid has an actual fatality rate similar to the seasonal flu. It is NOT the Bubonic Plague or Ebola as the media want you to believe.
You had a 50% chance of ending up in hospital if you caught Covid, when the reality for relatively fit and healthy people is far less than 1%.
Everyone else was a danger to you, when in fact only symptomatic people have enough viral load to be contagious. Asymptomatic transmission is “not a thing” and in the words of Tony Fauci from early 2020 “asymptomatic transmission has NEVER been a driver of a flu like infectious disease”.
The fact that asymptomatic transmission is a myth renders Social Distancing, Mask Wearing and Lockdown Restrictions scientifically baseless. Multiple studies have also confirmed that community mask wearing has no effect on reducing viral transmissions – masks are splash guards NOT virus blockers. The purpose of all of these measures was and remains CONTROL, NOT Public Health.

So the majority of people have been living in paranoid fear for nearly 2 years of something that is not actually any danger to them (beyond a few days in bed with the flu).
This is the actual definition of Mass Formation Psychosis.

The aim has always been in the words of Bill Gates “to get a needle in every arm”, irrespective of whether the person gets any benefit from the injection, or has Natural Immunity from a previous Covid infection.
The purpose of injecting everyone (or nearly everyone) is to implement “Vaxx Passes” and Digital ID’s.
The purpose of the Vaxx Pass or Digital ID is a precursor to a totalitarian Chinese style Social Credit Scoring system where the government controls every aspect of your life and can switch off your “privileges” (employment, education, travel, social activity, access to bank account, and food) on a whim.
Corporations will also data mine the information on your Digital ID – the government will sell the information to them if they don’t give it away as part of some tech deal.
See Bill Gates and Microsoft’s ID2020 where the entire world signs up to a digital ID system that contains your “vaccination status”, biometric ID, access to bank accounts, as well as whatever else the government wants to store on it. 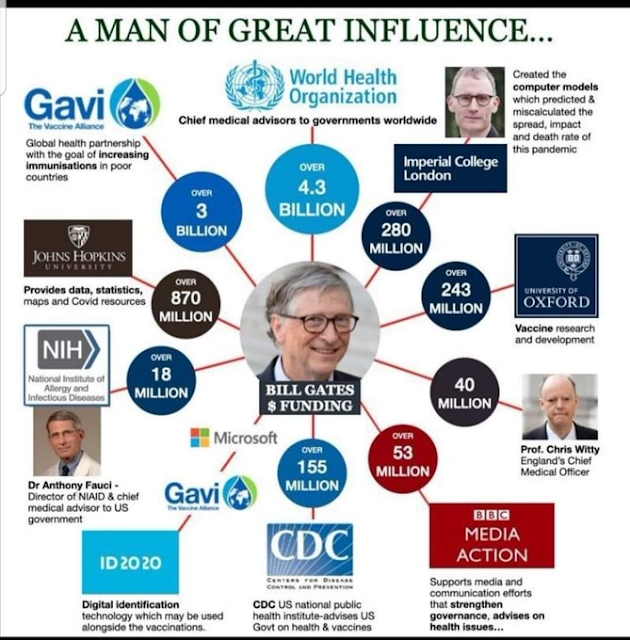 The first stages of coercion for this plan are already being implemented.
Mandatory vaxx orders on pain of being fired for various categories of workers.
Mandatory vaxx orders for colleges and schools in various places.
Totalitarian Vaxx Passes have already been implemented in numerous countries and regions, including parts of the US, UK, Austria, Germany, Italy, France, Netherlands, Belgium, Canada, Australia etc.

Various governments are already imposing heavy fines (or threatening to impose heavy fines in the near future), for people who refuse to be poisoned with the Covid Injections or “Booster shots”.
These countries include Austria, Germany, Italy, Greece, and Australia.

Access to government pensions and welfare/unemployment payments (Social Security and Medicare/Medicaid in the US) are intended to be made dependent on getting the vaxx.

Various governments are setting up “quarantine camps” for people who refuse the highly dangerous and completely ineffective Covid Clotshot injections, or refuse the 3rd, 4th, 5th or more “Booster shots”.
These countries include Australia, Canada, and the UK. The US already has its FEMA camps.
In the US nearly 50% of Dems want to lock up those who refuse to be poisoned with highly dangerous and worse than useless ClotShot injections that INCREASE the spread of Covid. 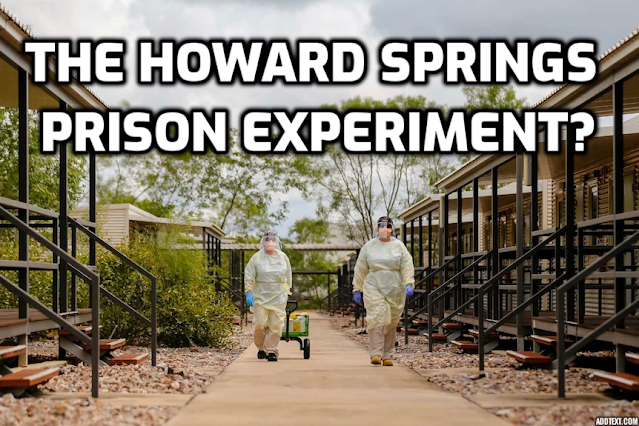 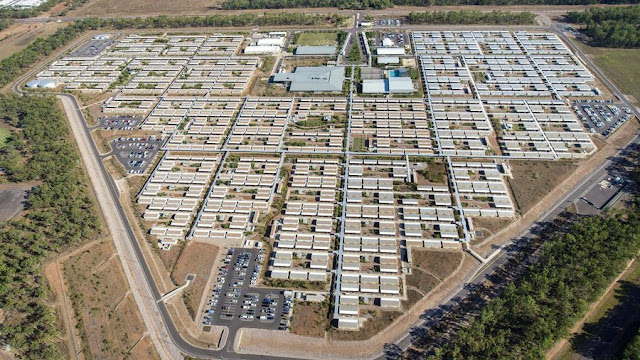 The Vaxx Passes, Digital ID, Social Credit Scoring System, and “Climate Change” “Zero Carbon” lifestyle restrictions and taxes, are all part of the Globalists plan for “The Great Reset”, where “You will own NOTHING and be happy” while the Oligarchs will own EVERYTHING.
The intended Carbon Reduction is a large number of YOU. 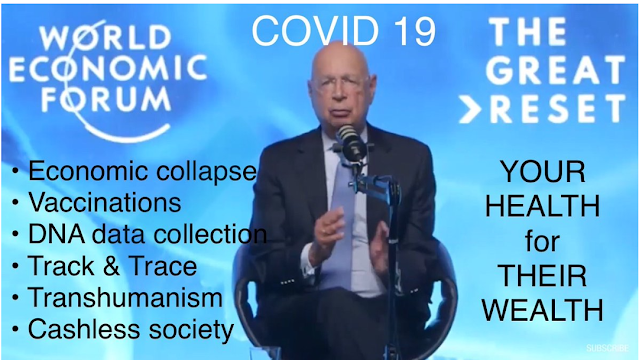 Things have ALREADY GONE MUCH TOO FAR.
If we do not stop this now, before mandatory vaxx orders for the general population and Vaxx Passes become the “New Normal”, it will be TOO LATE.