Since the 2008 financial crisis, loose monetary policy with near zero rates and QE have been the primary interventions used by the Fed.

Of course, there were brief stints of tightening, but as you can see on the chart below, overall Fed monetary policy has already cost retirement savers $4 trillion: 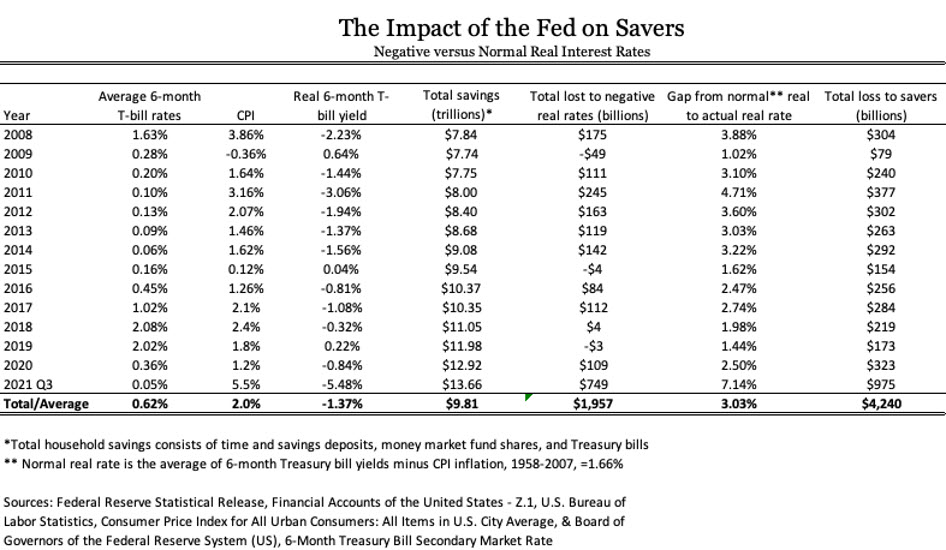 So it goes without saying that the Fed has made life a bit harder for the average saver, while trying to keep the bubble inflated that resulted from the “recovery” following the crash in 2008.

The past is the past. It’s too late to do anything about it. So today, we’ll focus on the next decade. Those economic interventions from the Fed could have even worse consequences…

A Forbes article summarized the financial applications very well, pointing out that recent economic boom (which began early 2009) is partly an artificial one – and the inevitable consequences:

It’s sort of like the way the U.S. Forest Service uses prescribed fires or controlled burns to keep woodlands healthy. “Trees are stressed by overcrowding; fire-dependent species disappear; and flammable fuels build up and become hazardous.” Without controlled burns, when a fire does eventually break out, the results are catastrophic.

We’re currently living in a time when creative destruction has been suspended. We’re looking at a market that hasn’t had a controlled burn in a long, long time.


Here are the likely consequences…

Ron Surz, CEO of GlidePath Wealth Management, issued a warning directed at financial planners and financial advisors publication called 401(k) Specialist. He warned the entire next decade could be a brutal one for retirement savers:

I reprimand regulators and fiduciaries for failing to protect naïve beneficiaries when they are near retirement. I warn that baby boomers will spend most of this decade in the “Risk Zone” and might never recover from an imminent recession that I believe will begin in this decade.

Here’s the problem ­– the Fed’s planned rate hikes could have on the economy as sending the U.S. into recession:

The most likely spoiler is the Zero Interest Rate Policy (ZIRP) termination since rising interest rates decimate stock and bond values. The reduction in bond values is straightforward because bond prices fall when yields rise.

The impact on stock prices is more nuanced. Investment analysts estimate a fair stock value by projecting earnings and then discounting those back to today.

That’s a lot to take in… Basically, higher interest rates will push down both historically-overvalued stocks and bonds. In summary, Surz tells us, “The economy is teetering on the brink of disaster for a variety of reasons. Economic tectonic plates are shifting.”

It shouldn’t be news to anyone that market crashes are just par for the course. They happen. They recover.

The big question is whether the market recovers quickly (a V-shape recovery), or slowly (a U-shape recovery). This is critical. Quick recoveries can happen in less than a year. Slow recoveries can last longer than an entire retirement. Surz cites the 1929-1959 recovery which took, you guessed it, thirty years.

Retirees don’t have thirty years to wait for their assets to recover! Surz correctly points out “they will be spending in the throes of a disaster, exacerbating the problem.”

Okay, that all sounds very dire. But we all remember what happened the last time the stock market crashed (and the time before that, and the time before that…) The Federal Reserve charged to the rescue! They flooded markets with trillions in liquidity, and bailed out big banks and subsidized emergency government spending and saved the day.

Ron Surz thinks “The Fed will not save the day this time because it can’t — it’s exhausted its moves. The next crash is likely to be a deep U-shape.”

The Fed’s “moves” are, as we’ve seen over the last two years, highly inflationary. Surz thinks the Fed has painted itself into a corner, where they simply can’t ride to the rescue once again. Interest rates are already too low, inflation too high and government debt too vast to allow another massive Fed intervention.

It’s important to note this isn’t the advice of a prophet of doom. Surz isn’t selling anything. The entire point of his article is to warn his fellow financial advisors and planners that, if they aren’t considering this scenario on their clients’ behalf, they’re failing in their fiduciary duty.

With these concerns in mind, now is a good time for you to consider your financial future.

What to do when the economy is “teetering on the edge”

Stocks have been whipsawing chaotically since October. We know the market is overvalued according to virtually every closely-followed indicator of market health.

Does this mean the bubble is about to burst, resulting in a market crash? It seems more probable than not.

If the market does crash, will it develop into the long-term “U-shape” recovery like Ron Surz thinks? That also seems probable.

Here’s one thing we’re certain of. When the next crash does happen, millions of investors will liquidate their holdings and scramble for a safe haven. Physical precious metals, especially gold and silver, become incredibly popular because both have historical track records that last centuries. Physical precious metals can’t default, are uninflatable and unhackable. Their value doesn’t depend on the hope of a Federal Reserve rescue.

Surz wants to make sure everyone in America is warned. If you can’t afford to wait 20-30 years for your retirement savings to recover after a market crash, now is a good time to reconsider your asset allocation. Learn how gold performs over time and consider the benefits of well-diversified savings to help protect your financial future regardless of market conditions.

Not 1 new car was sold in Shanghai last month. A city of 25 million people.