The media hated them.

Big Business, numerous federal agencies, and politicians of all stripes hated them too.


Tiffany’s, the famous jewelry company, vilified them in a full-page advertisement in The New York Times, calling them “unconscionable.”

The villains everyone loved to hate were the Hunt brothers. They were critics of the fiat money system and advocated hard money based on commodities.

At the time, private ownership of most gold was illegal in the US. So the Hunt brothers turned to the next best thing: silver.

From the late ‘70s to 1980, they stockpiled silver. And unlike other investors who settled their silver trades in cash, the Hunts took physical delivery. This often meant flying the silver to Switzerland for storage. 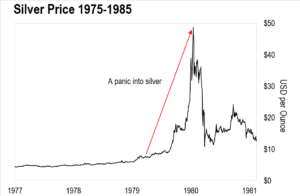 But were the Hunts really the bad guys everyone made them out to be?

They did nothing unethical. They just exchanged US dollars for silver from voluntary sellers. In fact, it was a response to the government’s unethical actions…


You’ll recall President Nixon severed the US dollar’s last link to gold in 1971. Without the discipline of gold, there was nothing to stop the US government from printing as many dollars as it pleased and diluting the purchasing power of savers. As a result, the dollar was now a pure fiat currency.

The Hunts bought silver because they figured the US government’s actions would lead to inflation. And they were right…

The ’70s saw the highest inflation levels in living memory—even according to the government’s own crooked statistics.

Still, that didn’t stop the US government from going after them for charges of market manipulation. To that, one of the Hunt brothers said: “Apparently the CFTC is trying to repeal the law of supply and demand.”

You see, the silver market is tiny. It’s roughly 1/10 the size of the gold market. So it’s prone to crisis-driven upside explosions as money floods into it during periods of high inflation.

And today, the stage is set for another explosion in inflation. I expect it to kick off a crisis-driven mania into silver like what happened in 1980, but potentially even bigger.

Frankly, there is only one reason I am interested in silver.

I’m not interested in silver as money—because it is inferior to gold.

I’m not interested in silver because of its industrial uses either—especially at a time when the global economy is on the precipice of the biggest crisis in generations.

The only reason I am interested in silver is that it is prone to crisis-driven upside explosions. It is a small market with enormous speculative potential during periods of monetary chaos—such as the one I think we are entering now.

Gold is primarily a monetary metal. Consequently, industrial uses make up a relatively small portion of the overall demand for gold.

Silver is the opposite. It’s primarily an industrial metal with monetary use making up about 15% of the overall demand.

That 15% usually is inconsequential in driving the silver price. But during periods of monetary chaos and raging inflation, people flood into alternative forms of money that hold their value better than rapidly depreciating government paper currencies.

It is during these times that there is often a stampede into silver. And because the silver market is so tiny, it quickly gets overwhelmed, causing the price to spike.

That’s why I like to view silver as an industrial metal with a call option on inflation and monetary chaos.

It all could happen sooner than most realize, and I think the price action will be explosive.

That’s because the US government has printed more money recently than it has for its entire existence.

Thanks to the Covid hysteria, governments worldwide have thrown out the last semblance of fiscal and monetary sanity. As a result, they are destroying their currencies at a breakneck pace.

Deficits are exploding to previously unthinkable levels. The US government is issuing avalanches of debt to finance all this spending. So, who is buying all this debt? The Federal Reserve and its printing press.

In the end, it’s likely to be measured in the tens of trillions of dollars or more.

It’s the most reckless monetary action in the history of the US. Moreover, it has set the stage for an explosion in inflation—notwithstanding any token moves to tighten.

Silver’s monetary demand skyrockets during periods of high inflation. As money floods into it, the price spikes.

It has happened before, and it will happen again—soon.

The “Next Hunt Brothers”

Today, the stage is set for another explosion in inflation. It’s likely to be even more significant than the inflation of the 1970s. I expect it to kick off a crisis-driven mania into silver like what happened in 1980.

Adjusted for today’s prices, that could mean silver soaring above $190 an ounce—many multiples the current price.

If that happens, silver mining stocks will go up even higher—by orders of magnitude.

People will panic into precious metals once the dollar starts to lose its value in earnest—which I expect could be sometime in the next 12 months.

It will be similar to what happened in the ’70s and ’80s, but likely on a much bigger scale today.

But this time, it won’t be the Hunt Brothers.

The “Next Hunt Brothers” will be the masses scared of inflation eating away their savings. They’ll quickly gobble up the minuscule silver market, and it will cause the price to spike.

The stars are aligned for a silver price spike for the record books. Now is the perfect time to get positioned.

Jerome Powell: “I think we now understand better how little we understand about inflation.”

Can a Nation Prosper as its Institutions Fail? – Investment Watch