COVID-19 and Australia’s Housing Crisis: How the Intergenerational Impact Can Go Undetected

COVID-19 has resulted in an up to 15% increase in property prices in Australia, further exacerbating the Australian housing affordability crisis and potentially locking millions of Australians into a rental trap. Average Australians know that paying rent instead of being a homeowner puts them in a disadvantaged position. Unlike mortgage payments, which are effectively savings, money wasted on rent will never be used on a family’s education or health. Therefore, an average Australian would be particularly surprised to learn that when researchers and the Government quantify Australians’ equality of opportunities, they ignore the fact that some people have to pay rent while others do not.

In a new study, I demonstrate the significance of this omission. Using data for Australia, the United States, and Germany, I found that only Australia sees a noticeable reduction in the equality of opportunities when renters and owner-occupiers are treated equally. The findings challenge the Australian Government’s claimed success of providing citizens with equality of opportunities and show hidden and ignored inequalities. This problem persists because the Government ignores the recommendations of the 2010 Henry Tax Review to ‘substantially increase rent assistance, gradually move to a uniform land tax and remove transfer taxes (stamp duty), and gradually move to a neutral treatment of rental and owner-occupied housing.’

‘Intergenerational income mobility’ refers to the degree to which an individual’s position in the income distribution persists or changes from one generation to the next. For example, a society in which individuals’ adult income is altogether independent of their parents’ income is a highly mobile society. A society in which one’s percentile in the income distribution is always identical to one’s parents’ percentile is completely immobile. In a practical sense, intergenerational income mobility demonstrates how individuals’ economic well-being is determined by a factor they never had a chance to influence: their parents’ economic well-being. Intergenerational income mobility is a measure of equality of opportunities. This measure, similarly to GDP, is routinely calculated for all countries in the world. Ranking of countries by this measure is an occasional source of pride for Australians.

The accepted practice while measuring the extent of mobility is to use disposable income. A rarely mentioned problem with this practice is that using disposable income risks misinterpreting the evolution of standards of living because economic well-being is determined not only by the goods one can buy in the market but also by sources of incomes that are in-kind (such as publicly provided health and education services) and non-monetary (such as imputed rents for owner-occupied accommodation and the consumption of one’s own produce). For that reason, income measures that include in-kind and non-monetary sources of income are conceptually superior. This long-running debate on the concept of income has been recently renewed with the Stiglitz-Sen-Fitoussi report, which stresses the danger of missing significant changes in the function of households and society because of an unnaturally narrow definition of income.

One component of non-monetary income that has particular quantitative significance is homeownership. One’s home is a financial asset and a source of services that influences standards of living through various psychological and consumption benefits. Since those who do not own their accommodation have to pay rent to access similar services, and the fraction of homeowners differs across countries and within countries across time, ignoring these differences can produce time-series and cross-sectional comparability problems. One way to solve these problems (which I apply in my study) is to assign a monetary value to homeownership. This hypothetical income stream is known as imputed rent. The imputed rents are often ignored in microlevel studies because they complicate the analysis.

Consider, for example, two individuals with an annual income of $50,000. However, one lives in a 2 million dollar house, the other with his parents. The first person could have rented his house out for a substantial amount of money, and the rent imputation method would include this hypothetical payment into his income. Conversely, ignoring imputed rents suggests that both individuals are equally well off. Figuratively speaking, homes are legalized ‘offshore accounts’ that allow hiding wealth. Other researchers have shown that this is a common method to access the Australian means-tested government system of benefits, as owner-occupied accommodation is exempted from those tests. This behaviour stems from the tax system that favours homeownership and encourages excessive homeownership, further exacerbating the affordability crisis.

Using Cross-National Equivalent File – data that harmonizes national household surveys for international comparison – I demonstrate that excluding imputed rent might noticeably mute the intergenerational transmission of income for some countries and not others. Table 1 shows how much income parents can transmit to their children in three countries when rents are included or excluded. Mobility is then understood as one minus persistence. For Australia, once neutral treatment of rented and occupied housing is applied, mobility drops by 22%, whereas the effect on mobility in the United States and Germany is negligible.

Another way to illustrate the influence of rents within one country is to see how the transition probabilities from one income group to another across generations changes with rents included or excluded. Table 2 reports two transition matrixes—one without rents, another with rents. The bottom of each cell, in addition, reports the difference between the matrices. For example, in the top-right cell, in the matrix where rent is excluded, 26% of respondents from the poorest households end up belonging to the richest households when they grow up. The inclusion of rent drops this share to 22%. Therefore, accounting for rent reduces the probability of transitioning from the bottom to the top of society by 4 percentage points.

In a transition matrix, values are commonly concentrated at the diagonal because most individuals stay in their income group as they grow up. The largest transition proportions are typically located on or close to the matrix diagonal because short-distance mobility is more likely than long-distance. In Table 2, this feature is evident whether rents are included or excluded. In general, neutral treatment of homeownership makes values more concentrated on the main diagonal, showing that Australian society is more rigid than might appear. Children born in the households from the lowest income tertile are 4% more likely to stay in the lowest income group, and children born in the richest households are 5% more likely to remain the richest. 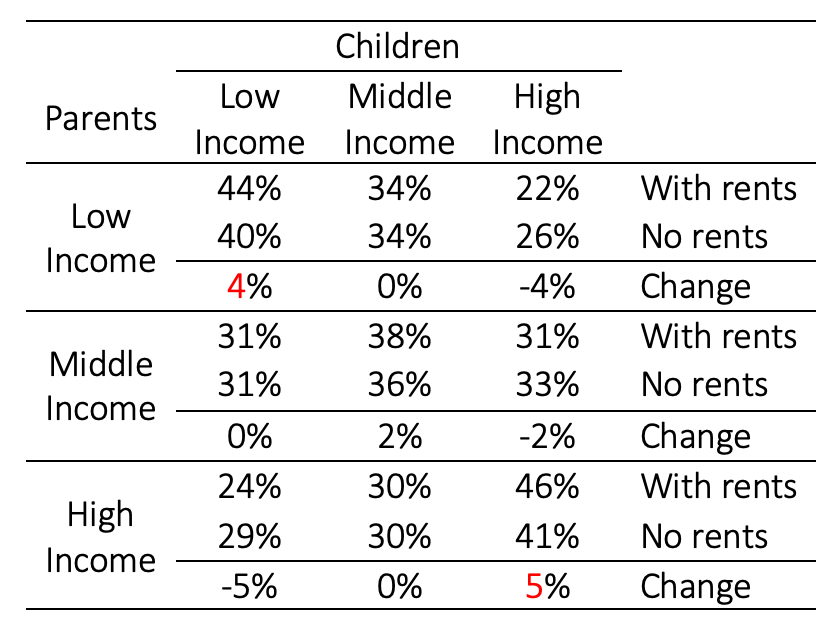 The results should be understood in the context of the ongoing Australian housing affordability crisis. The results show that ‘the Australian dream’ of owning a house within city limits competes with the country’s egalitarian aspirations. Australian public policy explicitly aims to ensure that children growing up in the poorest households have the same adult earnings prospects as children from more affluent families. These aims are unachievable without resolving the housing affordability crisis first.

The crisis is exacerbated by a non-neutral treatment of rental and owner-occupied housing. The Henry Tax Review clearly shows that this treatment is a problem that has to be addressed. My work shows the far-reaching dangers of ignoring this problem. There are two ways to equate the treatment: give a tax discount to renters or tax the imputed rents of owners. Taxation is more common and exists in Belgium, Iceland, Luxembourg, the Netherlands, Slovenia, Spain and Switzerland.

However, it is important to keep in mind that equalization will not on its own resolve the housing crisis. The reasons for high prices are structural. In Australia, unlike Germany or the United States, higher-paid jobs are spatially concentrated in a few locations, while the urban population density is low. A noticeable increase in housing prices during COVID-19 would, in reality, exacerbate the equality of opportunities further, yet as standard measures of mobility ignore homeownership, this exacerbation will go undetected by both researchers and the Government. At the same time, higher-paid workers, those who did not lose their jobs during the lockdowns, and those with access to parental financial help, will concentrate homeownership in their hands with a potential to extract rent from less fortunate but no less hard-working Australians.

Can We Identify Tax Aggressive Behaviour by Multinational Enterprises?

Why Women Work the Way They Do in Japan: Roles of Fiscal Policies

How Do Older Adults Respond to Private Health Insurance Rebates?